The third wave of the „Agile Transformation“

Agile working, agile corporate culture or agile frameworks are now mainstream and almost all organizations, large or small, have jumped on this topic. The reasons for this are manifold. They range from genuine conviction of those involved to the persuasiveness of external consultants without genuine conviction and acceptance in the organization. Clients usually only come across us in the 2nd phase of agile transformation, when the initial euphoria, if it ever existed, has died down and the question arises as to whether to completely abandon this „fashion“ and return to the „usual everyday life“ or how to make „the thing“ effective after all.

Some aspects of my current observations and some thoughts on this in today’s blog.

Everyone in the startup scene is familiar with the book „Crossing the Chasm“ by Geoffrey A. Moore from 1991. Here, Moore describes the adaptation process of technologies on the market from a marketing perspective and distinguishes between four customer groups: Innovators, Early Adopters, Early Majority, Late Majority, Laggards (Antagonists), depending on how early a customer decides to adopt a new technology. (Moore, 1991) „Innovators“ queue up at night in front of the Apple store to get the latest iPhone before it is available and „Laggards“ buy their first smartphone only when there are no more classic landline phones to buy („the oldest and cheapest will do perfectly“). (I wrote about the transfer of this idea to organizational change a long time ago (here)). If we now look at agile development, this model can be used just as well to describe the path towards the „3rd wave“ in which we currently find ourselves. Translated with www.DeepL.com/Translator (free version) 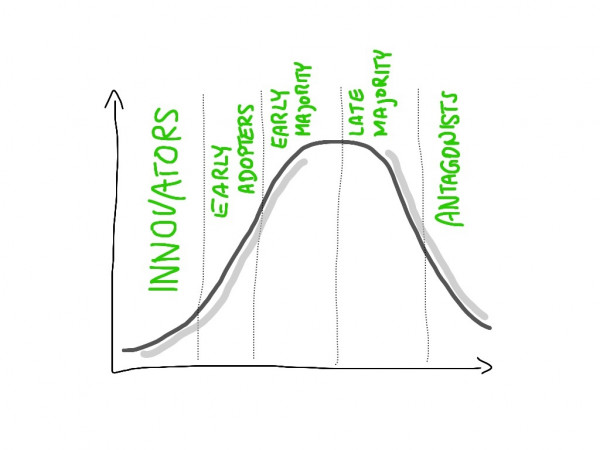 At the end of this first wave is what Moore describes as „crossing the chasm.“ Making a leap into the mainstream. This has certainly succeeded with the topic of Agile and led to a 2nd wave.

Today, it seems to me that the 3rd wave has now been reached. One can argue whether „Peak Agile“ has already been reached. Some indicators speak for it: There is an immense number of experts who seem to be convinced that they know and teach the „right“ way to agile. There are also now accepted assessments of „agile maturity“ or certifications of any role and agile topic. The majority of organizations have taken up the topic of agility in one way or another.

However, there are also those companies that may have been successful in the market and have not been able to or have not had to address the issue so far, as everything was running like clockwork, and who may only now be addressing the issue precisely because they are happy to wait and see and then integrate the aspects that are useful to them into their own effective management systems and do not want a „radical rebuild“.

In any case, it is clear from these explanations that the intensions as to why people decide so late for an agile transformation differ greatly from the groups of the 1st and 2nd wave. But what does this mean now?

I have already presented the „Agile PRISMA“ developed at the xm-institute at another place. (here). It is also useful here to describe in a little more detail the differences that we are currently experiencing. 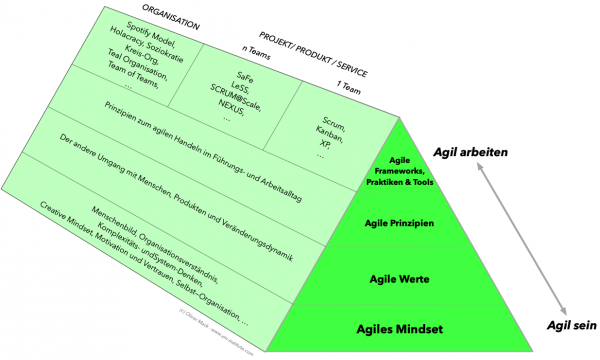 Companies from the 1st and 2nd wave, i.e. innovators, early adopters and also a large part of the early majority, have understood Agile as a new attitude, as a mindset, which is required in an organization in order to become more agile. They see Agile methods and principles more as mere tools to achieve this (more easily). The reasons why an agile transformation was started are rather found at the bottom edge of the prism. The top is merely a means to an end. There were very few tools at the beginning of the movement, so they had to be continuously adapted, developed or redesigned. Thus, in many successful companies, the tools and agile processes used are very individual and tailored to the company, i.e., context-specific. There are no „best practices“, but rather promising ideas that are iteratively developed further in the company.

Companies of the 3rd wave, i.e. Late Adaptors or Laggards, see Agile primarily as a toolbox that employees should apply and thus come from the upper tip of the prism. This is not bad per se, as long as you don’t forget the lower levels of the prism. All too often, I am currently experiencing this in my day-to-day conversations with executives who are just now starting an agile transformation. Even though perhaps the sponsor of the transformation, the executive of the division, or a board member sees the entire prism, it often requires a broader education of the leadership system that the core work is more likely to be at the lower levels, and thus on their own. If an „agile transformation“ is viewed merely as „working more agilely“ and the „being or becoming more agile“ is forgotten, the desired gain in efficiency, effectiveness, or flexibility usually fails to materialize. There is a danger of a „cargo cult“ (see our blog post on this here and here). Late adopters often expect quick success with „best practices“ that they can implement, regardless of the reasons for initiating an agile transformation. However, „best practices“ are „context-independent“ and therefore only make sense in very clear situations (highly standardized environment). But it is precisely for these environments that an agile way of working is not needed.

As a key finding, it can be stated:

What are useful interventions?

Does this mean that you should now not introduce any tools and primarily deal with the values and mindset level? Certainly not. Not even because these are not directly accessible or only with difficulty. They have to be addressed indirectly.

Does this mean that standardized tools and frameworks are not helpful and that you should reinvent the wheel in your own company? Certainly not. Also because you can learn a lot from existing experiences and tools and save a lot of time.

The first important concept in this context is Shu-Ha-Ri (see our blog on this here). This makes it clear how important it is, as a beginner, to first imitate existing „moves“ and „tools“ exactly. The important insight, however, is not in the start, but in the later process of transformation: The implemented imitation is not the end, but the beginning, if one wants to become a master. It is necessary to allow sufficient time and space for the further development of the system during the transformation and thus to create the possibility to effectively reach it’s own mastery. This is inherently present in the 1st and 2nd waves, while the 3rd wave should pay special active attention to this element.

Values show up in behavior

The second concept that can help with implementation in the 3rd wave is to work indirectly on the values and culture towards a more „agile“ one. This requires a shared understanding among those affected as to what „agile“ means in their context and what everyday behavior is necessary for this. Only with this shared clarity can work be done in the team or at the organizational level on one’s own behavior or on the behavior of team members.

The third concept in 3rd wave implementation is the active, if not primary, involvement of the entire leadership system of the area that is to be transformed in an agile manner. Unlike in other transformation projects, managers cannot and must not be mere clients and spectators of the process, but must actively step onto the stage of what is happening. Only in this way is the transformation of the management system, which is equally important for a more agile „being“ and „working“ and which actually represents the most challenging core of agile transformations, possible. Only through a comprehensive shared understanding of agility among all managers, acceptance of the changes to the leadership system design, and anchoring that goes beyond simple agile ways of working and tools can the desired improvements that agile promises in many success stories be achieved.