UPDATED: Will Apple lose? No. – Smartstraps, the Pebble Time Steel and the Apple Watch

UPDATED: Will Apple lose? No. – Smartstraps, the Pebble Time Steel and the Apple Watch 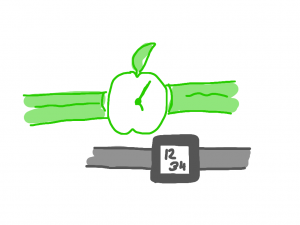 This is a special post on my blog. I never wrote about other things than new ideas on management and leadership in complex VUCA worlds. But after reading about the new Pebble Time Steel and the announcement of Pebbles Smartstraps as well as Apples announcement of their final press event on March, 9th 2015 for their watch, I had to.

Will Apple be losing the fight before already started?

A lot of articles these days believe, that the Apple Watch will be a big fail. They list several aspects:

So some bloggers and journalists see some difficulties before the sales even started.

I don’t think so…

I am less pessimistic: Although I supported the Pebble Time on Kickstarter and was very surprised about the announcement of the beautiful Pebble Time Steel today, I believe Apple will have a good chance to win this market, too.

And here are the reasons why:

So I am looking forward to the presentation on Monday and I bet the public will not be disappointed and Apple will have some more news to announce than just the battery life and the price.

UPDATE: In the meanwhile TechCrunch confirmed the existence of a port for linking smart bands to the Apple Watch! :-)